Time to Conform to Normality

Another short Nuke Tips so without further ado let’s normalise/normalize!

If you output a Pz (depth) image plane from Houdini’s Mantra and read it in Nuke, you’ll see it as a solid flat colour and wonder why it doesn’t match the view in the Render tab or Mplay in Houdini.

What happened is Houdini remap the Pz data by normalising the min/max value to a viewable range for the artist.

So here’s what we can do to make it viewable (and usable for various compositing tasks) in Nuke.

This is the end result:

Here’s the node graph setup for your reference: 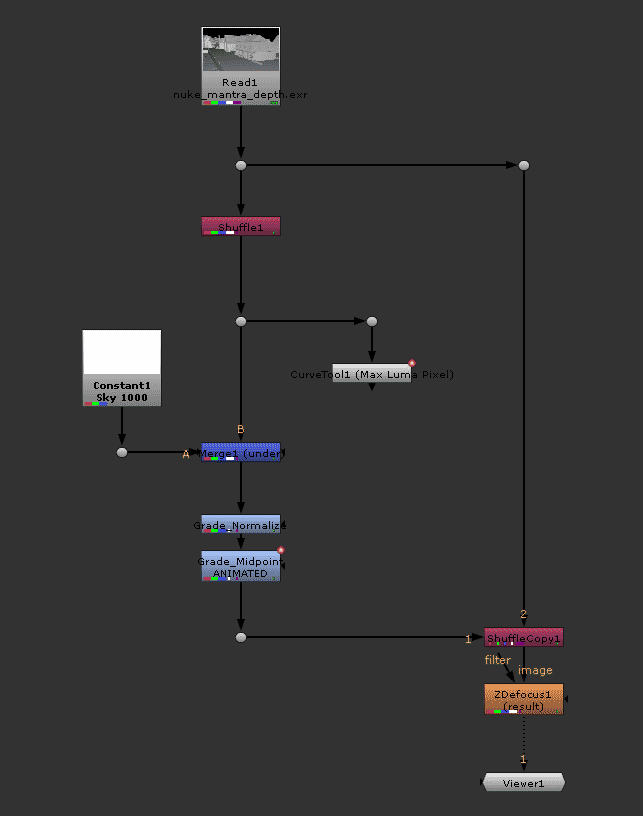 Seeing a solid colour in the viewer is not exactly practical!

This tutorial is more for Mantra way of handling the depth pass where it renders depth using the distance from the camera.

Imagine you have a building geometry that are 100 units away from the camera, the pixel value will be approximately 100.

Traditionally most renderer will offer options to set the near and far clip value to render the depth pass but this are destructive as we “bake” the possible depth range to fit into the final depth render. Unless you render and export the depth pass at least in 16-bit Half Float or better 32-bit Float (which can be overkill unless you need the highest accuracy during compositing).

Learn How to Render and composite Z-Depth in Houdini: https://www.sidefx.com/tutorials/learn-how-to-render-and-composite-z-depth-in-houdini

The right way to render a depth pass: http://forums.cgsociety.org/showthread.php?t=901605